Menu
<< Back to news summary 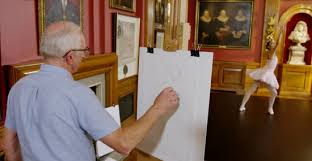 Looking back, I wonder how on earth I managed it! I did not realise how vast a challenge this was going to be, dreamed yes, reality no….

TBPC was intended to be based on the French classical Atelier art teaching system - a mentor was assigned to two groups of five of us ten amateur artists in order to teach and encourage progress throughout the 6 challenges, one each week for 6 weeks.

The reality was quite different. The mentors were conceptual designer artists and of little help.

Two paintings got me in to the Manchester audition, where I brought a third, a watercolour, and painted a still life partly on camera while answering questions from the BBC’s Sophie and Bex. Then endured a filmed interview ending with the punchline for how I would describe myself in three words- “ Immaturing with age!” That got me in…

Jonny, BBC’s Casting Producer selected the final ten artists, and two weeks later I got the phone call, “You're in!”

Including the psychiatrist visit, the 7 trips to London represented my greatest ever challenge since graduating in the late 60s - it was the most exhilarating, exciting, demanding experience of my lifetime - surely equivalent to a moon landing!

I don’t know where the strength came from: it was physically and mentally demanding so we all had to be pretty tough to withstand the pressure, the novelty to perform as a painter and paint under ridiculously warlike circumstances e.g.,

Four hour waits before Painting, never ending delays to rehearse entries, departures, lining up, surprise. Then we had the weather, the heat, travel, tiredness etc to contend with. No phones, cameras, watches, hats, sunglasses, no entry here, no talking there, new identical shirt every day...

But the desire to do well worked!

We all overcame the fear, the interruptions for interviews every fifteen minutes from Presentors and BBC staff, Dionne and Lyndon.

All ten are accomplished amateur artists and were able to raise the bar, and so achieve tremendous success in our work.

I learned how to overcome fear, but realise my own limitations e.g. Movement which defeated me.

I now know better how to plan a painting.

And to celebrate my own success!

But the greatest success of the whole event was the real spirit of friendship all competitors now have. And that includes David Milligan and Phidel the interpreters, and Paul Rowe who has tirelessly produced this fantastic website! And that camaraderie continues….

The ten artists are now great friends, such that they are all coming to Glasgow in 23/24 June 2017 for their first reunion where they will be painting in the Glasgow School of Art under tutor Rosemary Beaton, then displaying their own work in Christos gallery in Great Western Road during the annual West End Festival, plus judging a school art competition.

This should serve as a template or useful trial for future events through the UK.

If you need any more information or want to arrange a viewing of any of my artwork, please complete the form below and I will get back to you as soon as I put my paint brush down.

Thank you! Your submission has been received!

Oops! Something went wrong while submitting the form :(